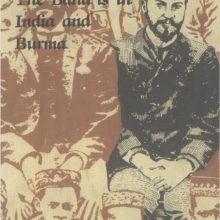 A Year With the Bahá’ís in India and Burma

Originally published in 1908, this short memoir is the moving account of the first visit by a Western Bahá’í to the Indian subcontinent. Sprague has given us a priceless description of several early Bahá’í communities.

The account begins with the author’s pilgrimage to ‘Akka, and the instructions were given to him by ‘Abdu’l-Bahá. He then takes us to Bombay, Rangoon, and Mandalay. Back to Rangoon, and then to Delhi and Lahore, we see a broad spectrum of Bahá’í communities at the turn of the twentieth century. Sprague paints a clear picture of the transforming power of the Bahá’í Cause that could bring together Muslims, Zoroastrians, Buddhists, and Hindus as a single-family.

The quintessential experience of his trip came when Sprague was struck down by typhoid in Lahore and almost died. An Indian Bahá’í traveled from another city to nurse him back to health. Sprague survived, but the Indian believer did not. This was the highest demonstration of Bahá’í love, that this Indian man should give his life for an American stranger because they were both believers. Sprague would tell this story for the rest of his life.